Hey guys, my first ever Dungeons and Dragons character has reached retirement, so I figured I’d do a big write up of his story. A lot has obviously been cut out, to save time.

Salazar Ratkin was a scruffy druid who lived in the sewers for many years after his home town was wiped out by war and disease. He wielded his father’s thigh-bone as a magical staff, and learned to survive by eating rats and other small creatures. He could speak with plants and animals, but found that rats always had the most interesting tales to tell.

While on a routine visit to the surface world, Ratkin encountered a party of travellers who had been hired as caravan guards. Among them was Beorn, son of Beorn, a tough barbarian who would in time become Ratkin’s greatest friend and business partner. Although not one for socialising, Ratkin craved to see more of the world, and his magical abilities were an asset, so he was invited to join the party in their travels.

They uncovered hints that a great evil known as the Devourer was consuming the souls of the dead – and had set its sights on consuming the Gods themselves. But this story is not really about that party and their quest to save the world. Ratkin would go with them on many adventures, but his heart was always in a different place – he was on a search for meaning, and to find his place in the world.

Having been completely isolated from the outside world for so long, Ratkin was very distrusting and often racist towards anyone who wasn’t a human – sometimes even wasting critical time in battle to mock elves and halflings. He gradually became more accepting of others during his travels, but he continued to see every slight against him as part of some greater conspiracy, so occasionally fell back into his old ways.

In terms of fighting ability, Ratkin’s signature move was summoning giant bear-like rats to fight alongside him – which could easily overwhelm or corner enemies. He was also a talented healer, and a collector of powerful poisons and body parts. He considered himself a doctor and scientist, but many others would look at him an see a depraved lunatic. In the end his greatest talent was simply staying alive – he seems to have been born with naturally high stamina and good health, and could use many utility spells to escape from dangerous situations (such as climbing on walls like a spider, or transforming into an eagle).

After watching his stoutly religious ally, Justice Whamfore, die a worthless death in battle, Ratkin began to doubt the motives and eventually the existence of the Gods that many worshipped. There are so many types of powerful magic in the world, he figured, and yet the Gods could only communicate by… sending cryptic messages, granting good luck, or by changing the weather? If this was the extent of their power, they were not worth any praise, and could even be explained away entirely as the hallucinations of madmen and users of strange mushrooms, or just plain old chance happenings.

Ratkin became obsessed with the idea that the All-Faith, the world government, were using stories about non-existent Gods to control the population, and leading many believers wrongly to their deaths. He began to discuss his ideas with people like himself – the dirty lowlife of city slums. Many of them were instantly receptive of his teachings, as they saw hope for the first time in their lives, and they began to repeat them to others. Ratkin’s teachings however had no effect on men of higher social standing – they almost always proved to be resistant to conversion, and remained faithful to their delusions. Ratkin became wary of the upper classes, as they would certainly not support what he was doing. And so the cult of atheism began to slowly spread among the lowest classes of major cities, who began to live underground in an attempt to avoid attention. The members of the cult communicated through rats – by attaching messages to them, or by speaking directly to them.

Ratkin’s followers were not intelligent people. Attempts to integrate them with the party and put them to work had always backfired. They brought weapons to meetings and tried to indiscriminately shank anyone who did not bow down to Ratkin. In battle, they only focused on defending Ratkin, and often died swiftly. The only tasks they were exceptionally good at were simple suicide missions – such as burning down a building to destroy evidence. Ratkin began to have doubts about where his cult was heading, and if its members were even capable of functioning in any constructive way. However, a man named Lule had distinguished himself as the cult’s most talented manager. He seemed to take initiative and plan ahead, unlike the others. He had orchestrated the murder of a royal guard who came to investigate the cult. News of this event greatly troubled Ratkin, as it meant that the All-Faith were becoming aware of his activities, and he had just given them another reason to come after him. Ratkin used his magic to meld the guard’s body into a large stone in the sewers, hoping that it would never be found. Ratkin made a pact with Lule, giving him some of his magic powers, and creating a warlock. This was very illegal.

Lule was promoted and taken on a dungeon-crawl with the party to test his skills. He drew a short straw and was ordered to touch a cursed mirror, which promptly sucked out his soul and reduced him to an empty shell of a human. Upon completing the dungeon and slaying the boss, the party found an obsidian heart, full of many souls, including Lule’s. This was a phylactery that was being used to create a lich, so the obvious reaction should have been to destroy it immediately. For the first time, Ratkin began to feel responsible for his followers, and guilt-tripped the party into keeping the obsidian heart. With the help of Dennick, a powerful necromancer (who also happened to be the mayor of the city), Ratkin performed a resurrection spell to bring Lule’s soul back into his body. Resurrections were assumed to be impossible (on account of the Devourer eating souls), and attempting them was also very illegal. Lule immediately returned to the cult to spread word of his master’s divine deed.

Some months later, upon returning to the cult’s headquarters, Ratkin discovered that Lule had been hard at work, creating a race of rat-men. Ratkin’s followers had come to see him as a new god, capable of miraculous deeds. The cult’s membership was now several hundred strong, and Dennick had become aware of its existence. Dennick, being a friend of Ratkin’s (and also being culpable in some illegal activities), gave him two days to deal with this problem, before a crackdown would commence. Things had grown out of timid Ratkin’s control, and he was pushed forward by the zealousness of his followers. Ratkin only wished for the survival of his new family, and so ordered them to migrate to the slums of every town and city on the map. Many would not survive the journey, but those who did would continue to spread his teachings in the filthy depths.

Shortly afterwards, Ratkin recieved a letter urging him to meet with the All-Faith, to settle this matter once and for all. Ratkin sensed a trap, and set up fortifications in a nearby ruined monastery. He was accompanied by Lule, Beorn, and a selection of the finest warriors from the cult. They ate a mighty feast to boost their morale, and prepared natural traps – fog, vines, and living trees that would smash intruders. Ratkin had become a dungeon boss, and sent a counter-offer and invitation to the All-Faith.

The All-Faith had sent their most fanatical faction, the Purifiers, who’s mission it was to destroy heretics. They offered Ratkin a chance to surrender and be magically imprisoned for 1,000 years, in exchange for the lives of his followers. Ratkin strongly considered this offer, as several of his followers began to surrender. Chances of victory in battle were slim – but Ratkin had felt an untapped power building up inside of him, and this would be his only chance to use it. As the Purifiers rushed into the monastery, Ratkin ordered his followers to pray for him, while he began to mutilate himself – casting necrotic spells, and throwing himself onto the swords of the enemy soldiers. An angel appeared – a twisted abomination with many sets of limbs – and attempted to intervene. But it was too late, the ritual had succeeded, and Ratkin took on a new celestial form – half rat, half man, with wings and huge claws, and much larger than before. Ratkin and Beorn wrestled with the angel, while the cultists, living trees, and Purifiers duked it out and played support roles. It was an evenly matched battle, but Ratkin destroyed the angel with his last ounce of strength – ripping it apart with his claws while rats crawled out from his open wounds. The greatest symbol of the All-Faith had been defeated by sewer vermin.

The leader of the Purifiers made one final call for divine intervention, but no one came.
Ratkin gave his final orders – that his followers should look after each other and believe in themselves.
He then faded away and ascended to the celestial plane, to join the other Gods. 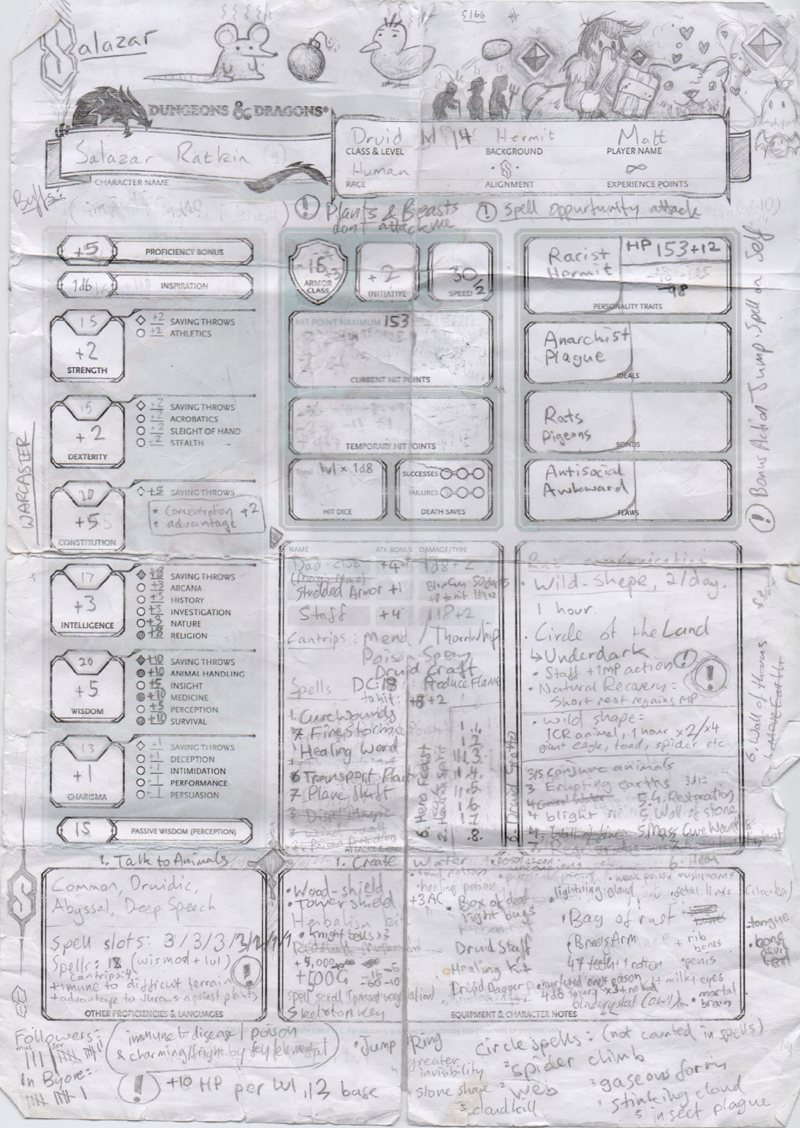 16 thoughts on “The Story of Salazar Ratkin”