Here’s my write up of 2017, with a list of the most memorable stuff. Nothing catastrophic happened this year, but the dullness of everyday life has worn me down a bit. Next year I’ll try to have more fun. I shouldn’t complain, it was a good year overall, and I got a variety of stuff done.

• My favourite games this year were Doom and The Witness. Other notable games include Snake Pass, Hunie Pop, Shantae: Pirate’s Curse, The End is Nigh, The Adventure Pals, Sentry Knight Tactics, Shadow of the Colossus, Ico, Abzu, Firewatch, Everyone’s Gone to Rapture, and Tadpole Treble.

• EBF4 was included in Humble’s Overwhelmingly Positive bundle with some other great games, and sold 135K super-discounted copies. This was extremely profitable, and resulted in very little user engagement.

• Went to Malta and saw ancient ruins, towns, crazy traffic, nearby islands, caves, seaside cliffs, and all that. We went in Winter so it was quite cold and not too lively.

• Visited Finland to see Ronja’s friends and family. Stayed around Helsinki and Turku again, and had a cosy weekend at the countryside. Also went to the zoo and had a vegetarian barbeque.

• Collecting Lego is getting out of hand now. I’ve got most of the old Aquazone sets now, and my mum keeps buying me whatever stuff she finds. At this point I have enough and should just play with what I have. Also went to a big Lego event at the SECC.

• Had a good weekend at the Scottish borders with my buddies. Trying to mount a floating unicorn in a fast moving river was a laugh.

• Ronja’s health is much better now and she’s getting some of the best grades in her class at Uni. Our relationship is still full of ups and downs, but things are better than last year.

• Witnessed a burning car and helped a little in the police investigation.

• The tiny amount of Bitcoin I mined in 2013 is now worth something, and I’ve been dragged into following Bitcoin news. This may be one of the dumbest crazes ever.

• Did a bit of hill walking at Loch Lomond, Edinburgh, the Cobbler, and the Devils Pulpit. Even though I’m reasonably fit these days, I still don’t do very much hiking/walking, and found some of these very challenging. Also visited Dumbarton castle and some Scottish country parks that I’ve never seen before.

• Got a huge new TV. Probably my best purchase ever. Played a bunch of couch co-op games with friends. Some favourites include Knight Squad, Overcooked and Ultimate Chicken Horse.

• Some other notable social events include me and Ronja’s humble birthday party, our Halloween cooking party, Lindsay’s Texas-themed birthday night at the Grand Ole Opry, Neil’s wedding, a few shows at the Fringe Festival in Edinburgh, Christmas dinner with my friends, Christmas Eve with my family and dogs, and a crazy new year’s eve at Ben’s.

• Started posting EBF5 development videos on YouTube somewhat regularly, and they’re quite popular, with my channel being at over 8,000 subs now. Lots of people are interested. Definitely a better use of marketting time than using Twitter or Tumblr.

• I’ve become much less optimistic about information technology this year, and have started cutting down my usage of social media and huge tech giants that are trying to take over the world. (Looking at you Google, Facebook, Amazon…)

• Made an EBF Discord server for chatting about the games and making debugging easier. That’s at 4,000 members now, and has been a very useful way of interacting with fans.

• I read more books this year than in any other, around 20 overall. I credit this to spending less time on social media and on procrastination in general. Some notable ones were Rise of the Robots, Tribe, Brave New World, 1984, The Road to Wigan Pier, Ordinary Men, Dictator’s Handbook, and the first half of Better Angels of Our Nature.

• Dungeons and Dragons has become a consistent part of our lives. Salazar Ratkin is well on his way to becoming a powerful atheist cult leader.

• I made a Patreon page, which got a lot of support, despite me not having very much to give to my patrons yet (full world map and boss fight demos still to come).

• Made about 38% of EBF5 this year (Roughly the same as last year, maybe slightly less). As always, everything is taking longer than expected and I’m getting quite sick of working on it. But it’s also looking really good, and finishing it will be hugely satisfying (and hopefully very financially rewarding).

• Started looking to buy a house, visited a few and came close to buying one. The search continues into 2018! 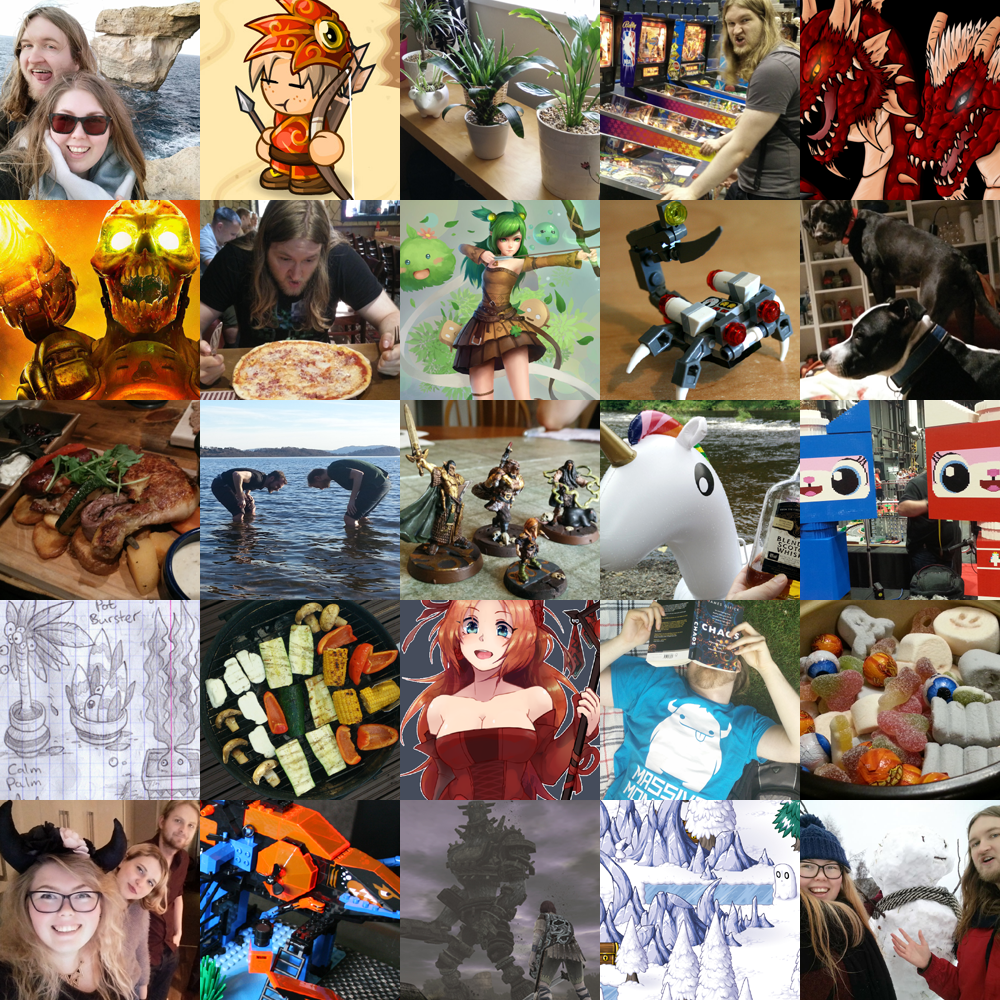