Working on some Steam assets today, so here’s a preview of the trading card stuff.
Steam has some very specific requirements for these, but luckily I had suitable images for them all.
• Emoticons are tiny pixel art, so it just had to be those foes I did earlier.
• Badges are small squares, so slimes fit in there perfectly.
• Cards have to look good in thumbnail form and also stretch to wallpaper size, so the cutscene art works there.

I was thinking about using fanart for the cards, but after trying some out, there was very few that actually fit the requirements. And consistency is nice too. I’ll use some fanart for the profile wallpapers though!

Hey guys, here’s the opening minigame and animation for EBF5!
Strangely enough I got tons of work done without the internet – I guess the distractions outweigh the conveniences most of the time.

At the Play Expo we only had one computer for attendees to play EBF5 on, so anyone who was waiting around was given a template to draw a cat!

The top-left ones are by me and my friends, and the rest are by random strangers.
Make sure to view the image in full size! 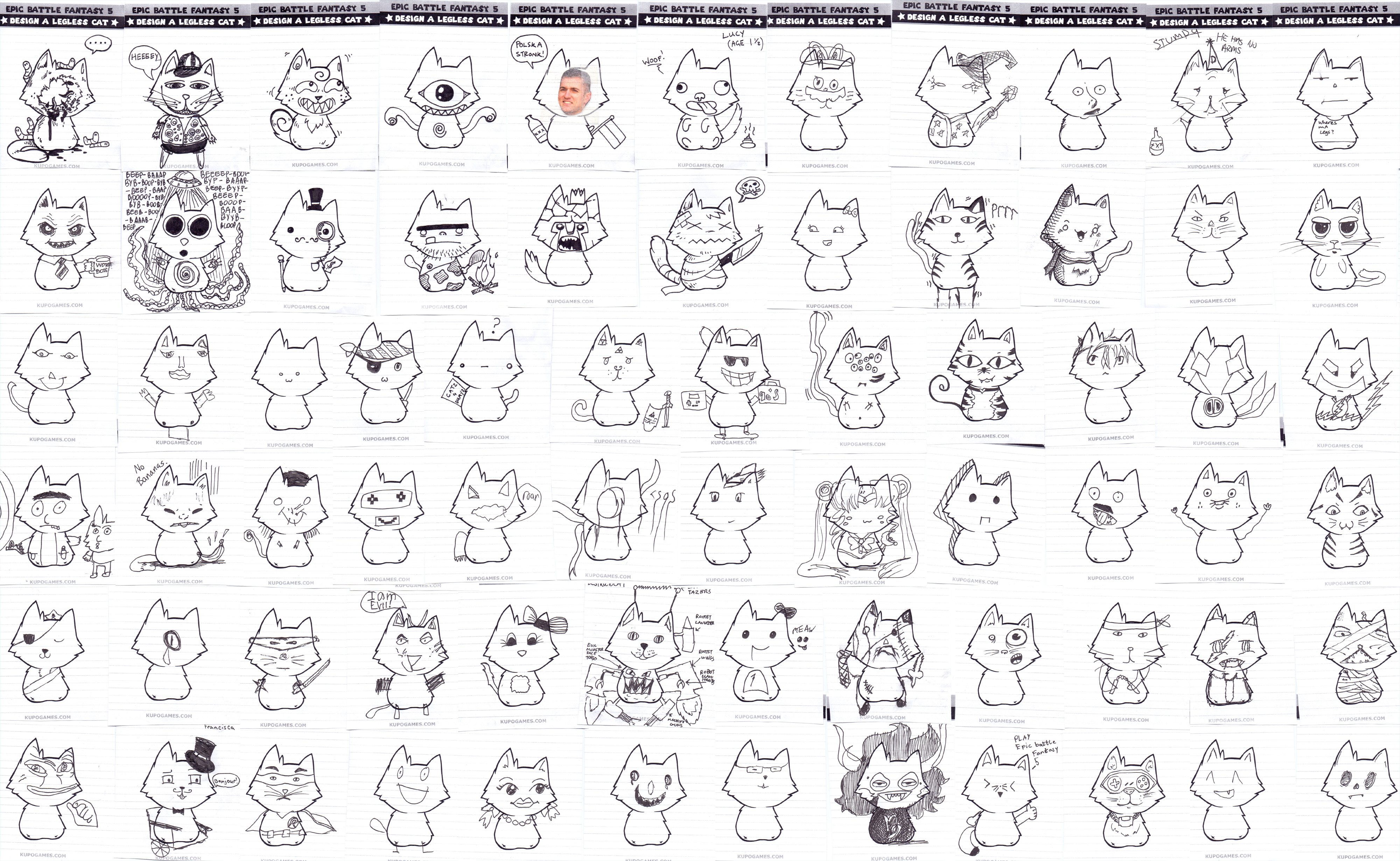 Hey guys, I’ve been without internet for over two weeks, but I’m back now. I guess I have to start off with a write-up of the Play Expo.

It went really well! Not a single thing went wrong!

Setting up was easy. I just brought in my computer, two monitors, a poster, an old pile of Kongregate stickers I got from Mochi London, some cute business cards to give out, and that was about it. The venue was conveniently 10 minutes away from my home. At first I didn’t have anywhere to put up my poster, but the guys next to us left very early so we essentially got a 2nd table just for that. Me and Ronja took turns manning the stall, so we didn’t tire ourselves out. (I also got to try some VR stuff on my break, woop!) 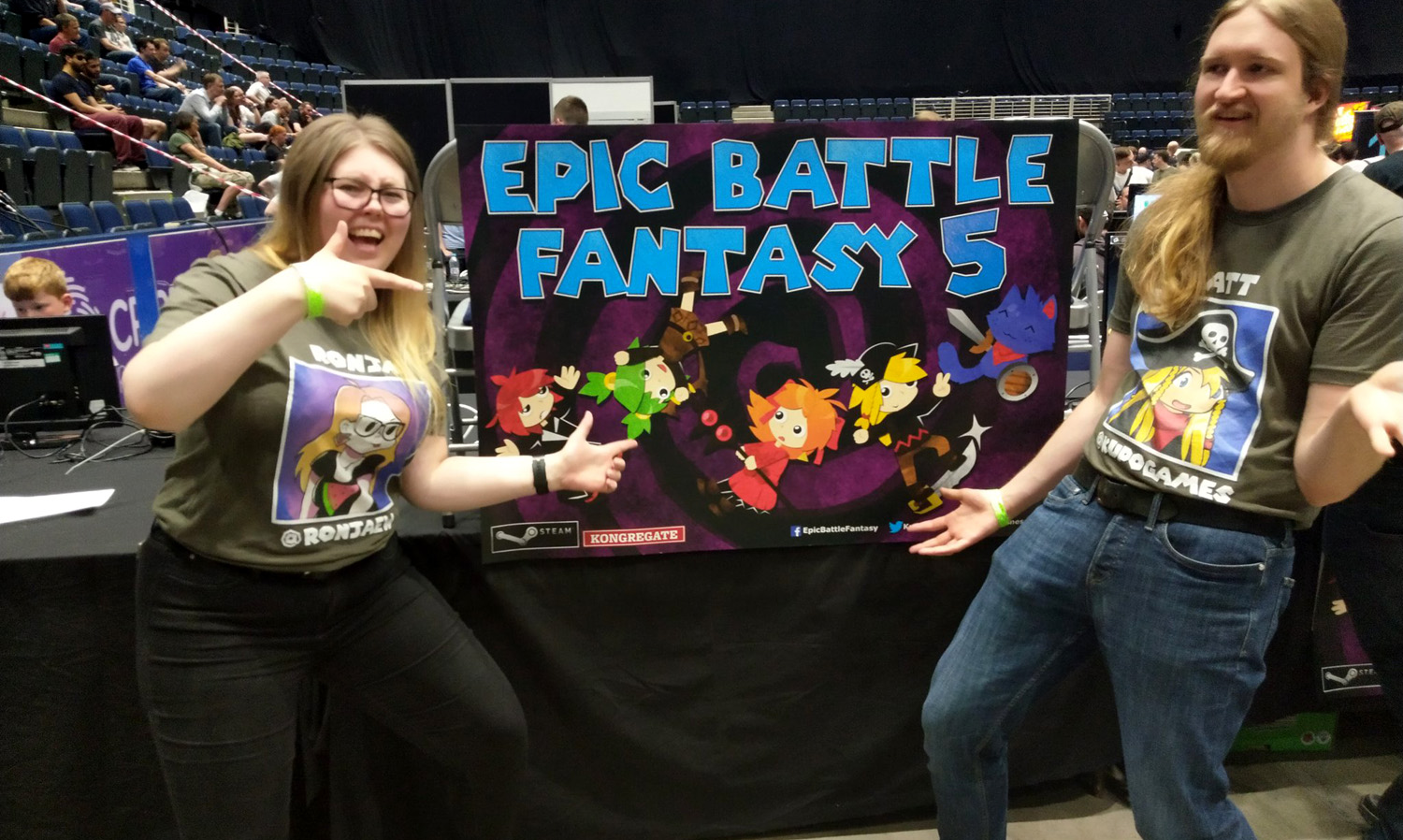 EBF5 never crashed. Both days it ran non-stop for 8 hours without any problems, which was pretty cool, but also what I would have hoped for since the demo was just the most basic parts of the battle system. On the second monitor I had my YouTube videos of EBF5 running on loop forever.

The audience was a bit different from what I expected. EGX in England was mostly for gaming enthusiasts, but while this event still had some of those, it was generally much more casual and family oriented. There were a lot of really young kids, but also a lot of parents and grandparents who weren’t even into video games at all. I ended up showing off EBF5 to a huge variety of people, and it was a very educational social experience for me. I learned how to talk to kids, disabled people, and a lot of very socially-awkward people.

I’m glad I had EBF5 configured in work-safe mode, and I’m happy I made that option available in the first place. Bouncing anime breasts were not out of place at the event, but I think it would have been a bit awkward with the game’s default settings, especially when young girls came to play.

A related point that surprised me was the lack of PC gamers! I think EBF5 was one of the only mouse-controlled games there, and a lot of kids were confused when they couldn’t find the controller or keyboard. Quite a few people had trouble using the mouse accurately, and double-clicking when single-clicks were fine. But besides that people picked up the game very easily. I just told them to pick commands and hit the baddies, and that was all they needed to know really. I only intervened to tell them how to heal when their health got low. 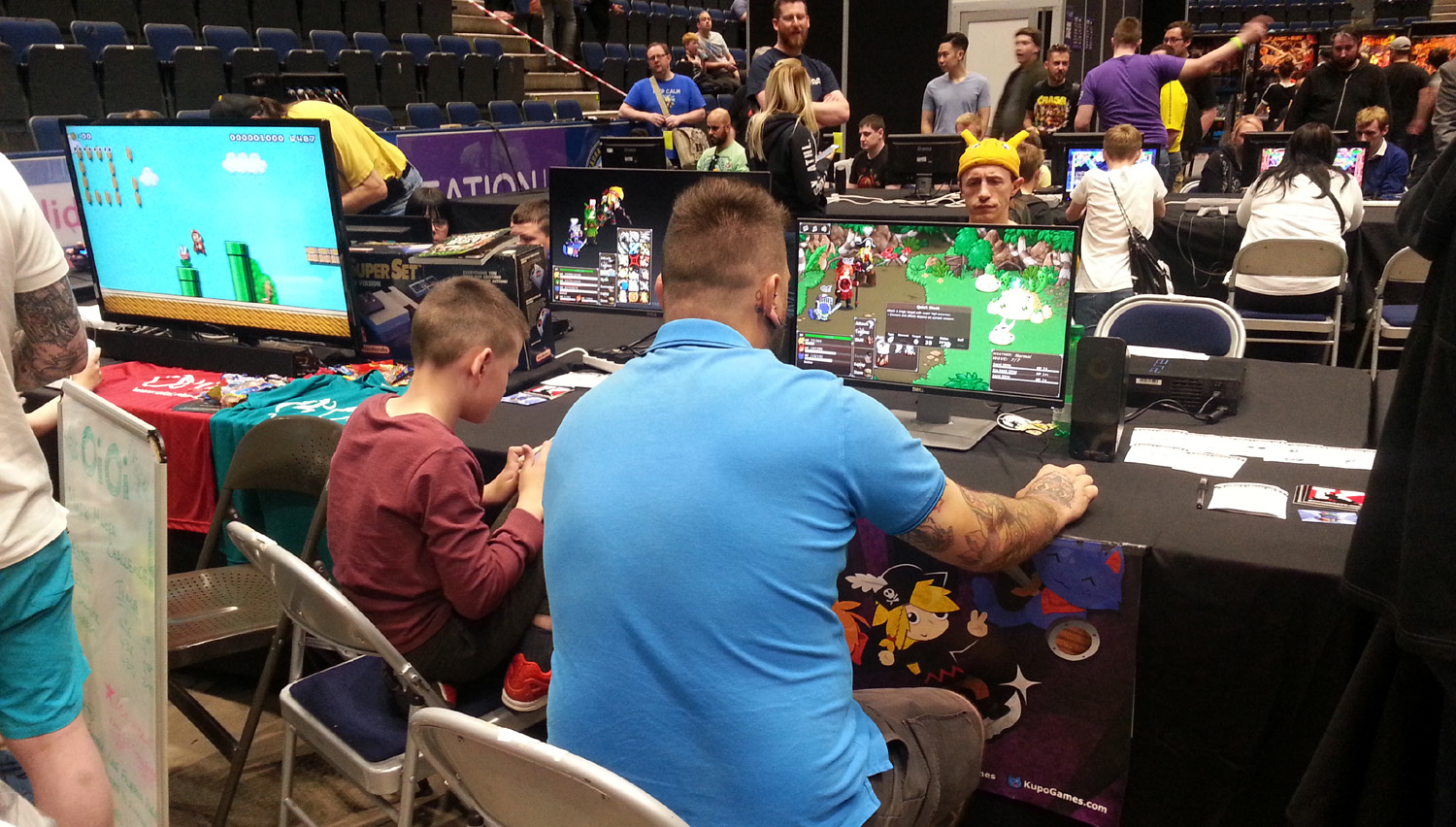 Besides all that we also got to know some of the other exhibitors, including Mega Cat Studios, who make modern NES games, Wrench Games who make card games, and Oi Oi Games who are a store for retro games (their Mario Maker stall dominated the area at first and sort of overshadowed us – not fair!). I don’t think there was anyone particularly famous there – there wasn’t even any official presence from the big gaming companies. It was all quite local and modest. A reporter from The Sun talked to me briefly, but in the end I don’t think he actually wrote anything about me.

I had around 5 people tell me they were fans of the EBF games, and another 5 or so who said they’ve probably played them at some point in the past. So that’s not bad – I’m not a total nobody!

Anyway, it was all a lot of fun and I’d love to do it again if I get more chances to do it so cheaply. (Grand total spent on the event: £89 and around 3 days of preparation)