Made 7 secret foes today, at least one of which is an ultra super cool boss.
Too bad it’s going to be a long time until anyone gets to see them.

The Zombie Hydra is back as a regular strong enemy!
I’ve given up pretending that they have bodies, they’re just huge snakes now. I’m not sure whether or not they’ll be able to revive each other, we’ll see.
There’s not much new to see here, the two new types are basically replacing some of the dragons.

Time to announce the 2nd winner of the Foe Competition, it’s CommanderGrunt with his design  of The Fallen! 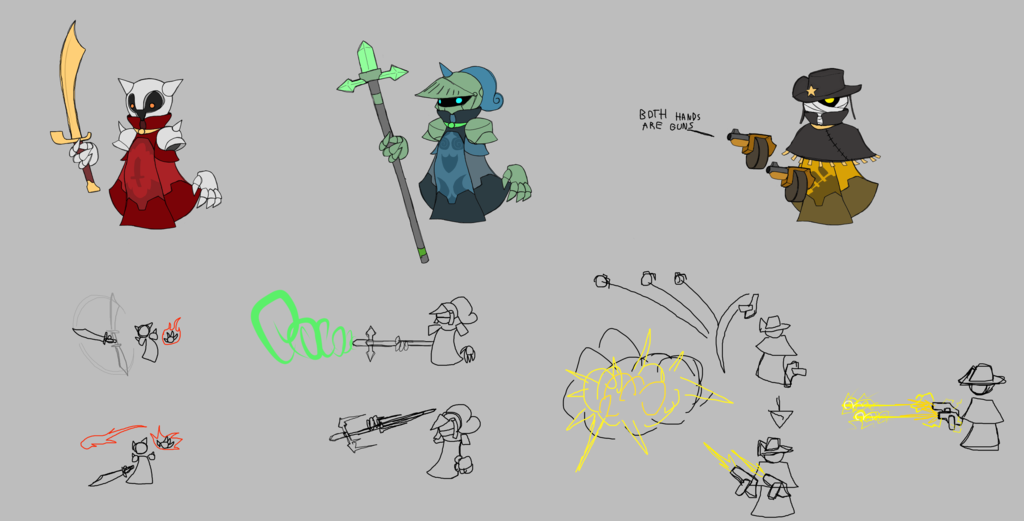 CommanderGrunt did a second set of drawings here.

These guys were a lot of fun to work on and I think they might be my favourite foes so far. I think their attacks turned out looking pretty awesome. Which one’s your favourite?

Hey guys, I’ve not been working much lately because Ronja’s come down with Rheumatoid Arthritis a few weeks ago, and it’s gotten severe quite quickly. I’ve been looking after her because she’s got the joint mobility of a 90-year-old, and that’s no joke.

Basically Rheumatoid Arthritis is an autoimmune disease that swells up and stiffens your joints, eventually leading to massive permanent damage. It’s mostly middle aged women who get it, but it’s not rare in younger people either. It’s incurable, but treatable, so regular medication will usually keep it under control, with only a few side effects if you’re lucky, and most patients will have mostly normal lives. If left untreated, you’ll end up with misshapen hands like the ones I posted yesterday.

Ronja’s starting her medication now, so she should be well enough to look after herself soon. The last few days have been incredibly painful for her, but her joints should loosen up in a day or two and our lives will hopefully be back to normal soon, except for the regular visits to the doctor.

So that’s about it. We’re interested to hear from you if you know anyone with RA.

I made the hands I sketched a few months ago!
Not all hands will be able to use all weapons, and not all weapons can be used for all attacks. These hands are another foe that will exploit your elemental weaknesses.