Hey guys, here’s a blog summary of my year! A huge part of the year was taken up by Bullet Heaven 2 development, and relationship stuff with Ronja.

• Went to the Indie Games Conference in London with Ronja, and met up with some other developers. Reminisced about the dead Flash game scene. Tried a VR headset for the first time. It was fun.

• I got super sick with glandular fever! My throat was totally wrecked and I got a crazy rash. The whole thing lasted 3 weeks, and for the worst week I could barely eat and couldn’t sleep at all. Saw the doctor 5 times, and none of the different antibiotics helped. Only codeine tablets could cheer me up. Luckily I’m now immune forever!

• I went to Finland with Ronja! I met her friends, visited some popular tourist attractions like the island fortress, went to an awesome theme park, celebrated her birthday, tried some proper clothes shopping, ate at a viking restaurant, and stayed at a cabin in the woods. It was a lot of fun.

• The whole family got together to paint the fence! That was a new experience.

• Went to a Ceilidh (A Scottish dance thing) and won best dancer by getting drunk and being an idiot.

• Went hillwalking like once. We really need to do more of that. Did some indoor climbing again, in a new place. That was fun too, but it didn’t last long.

• Started collecting Amiibos. I’ve got 30 of them now, and even bought 2 display cases for them. But I’m losing interest now that I own all the ones I really wanted.

• Started seriously learning how to personal finance. Read some books, saw a financial planner, learned to do taxes better, and set up a pension and some other investments. Hopefully that stuff will get easier over time.

• Became a fan of Steven Pinker’s books on human nature. Read The Stuff of Thought and the Blank Slate, and have some others on my reading list. They’re tough reads but very interesting.

• Ronja finally started posting her drawings online! She’s not good at sharing things with the public. I’m giving her pro tips on dealing with the internet.

• Added some more equipment to my gym, and achieved novice level in a few lifts. I’m satisfied with my current fitness level and will try to maintain it. Not trying to become a pro, just want to be reasonably healthy.

• Valve sent me an early Steam Controller! I was surprised that they found me worthy. The controller itself was interesting, but I didn’t find it to be very useful except for a few specific types of games.

• Published Bullet Heaven 2 on the web. The response was underwhelming. Casuals didn’t like it for the lack of permanent upgrades. People with old hardware couldn’t run it very well. Browser limitations made the controls and performance even worse.

• Published Bullet Heaven 2 on Steam. The game was well received by people who are into the genre, but not many people are. It didn’t sell great, but it’s on a lot of wishlists, so I’m hoping that after a few discounts it will cover development costs eventually.

• Epic Battle Fantasy 4 continues to sell well and funds the development of games like Bullet Heaven 2 which no one wants. Jk! I’m over that now. I’m working on Epic Battle Fantasy 5 now! I did a lot of concept art for it, and started doing some animations.

• Started searching for an apartment with Ronja! About time I moved out of my parent’s house, but I am going to miss some of the luxuries.

• I did a Christmas Steam key giveaway on my website and got 600 flattering comments! Took me hours to get through those, but it was fun. Christmas was fun this year, everyone behaved, and I got Lego!

I think that’s about it really. For next year I hope that working on Epic Battle Fantasy 5 is a lot more rewarding than working on Bullet Heaven 2 was, that our apartment search goes well, and that nothing catastrophic happens in general. 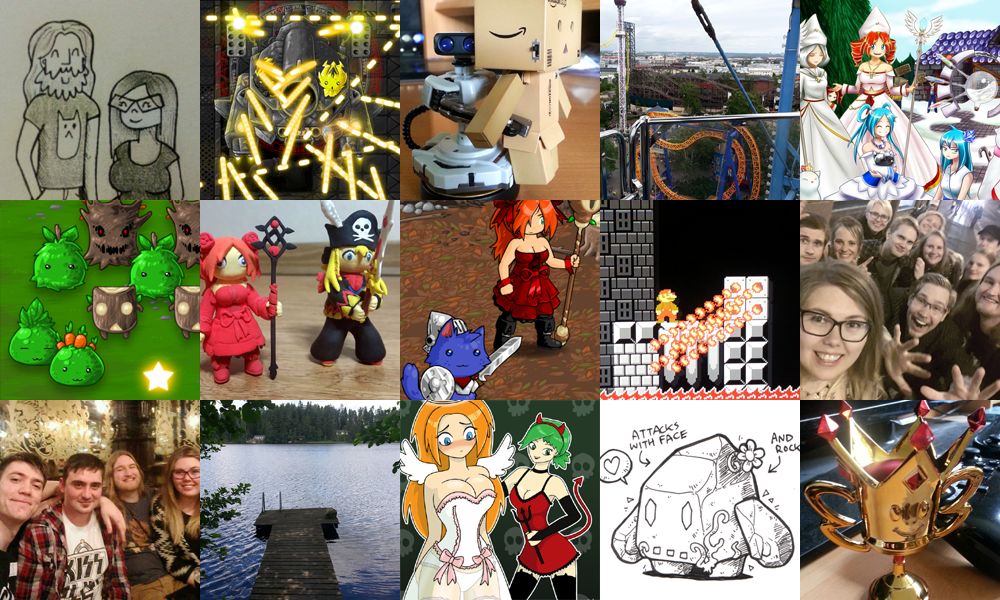