Remember the Furry Slimes from EBF3? Well they’re back, and cuter than ever!
I’m not really sure what animals they’re supposed to be though.

Anyway, I don’t know whether I should make them all appear together, or whether to have a different slime in each area. Thoughts?

Either way, they’re all functionally the same foe. 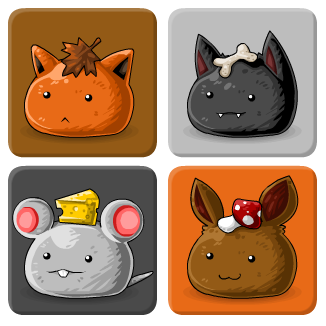 If anyone hasn’t heard, EBF4 was Greenlit on Steam yesterday!
I’m now working on an expansion for the game, which will be added to the Steam version of EBF4, and to the Premium version on Kongregate. Some of the new features might also leak into the free version too.

Here’s the plans so far…

The expansion will include a new area, called “Battle Mountain”, or something like that.
It’ll be roughly the size of the Jungle area, and will contain sub-areas based on the main areas in the game.

The new area will contain many challenging battles, including:
• 4 harder versions of the bosses.
• A marathon battle for each area of the game, where you fight all of the foes from that area, plus the boss at the end, in one battle. (much like EBF1 & 2)
• Some boss battles from the earlier games, including (possibly) the Cosmic Monolith, Wooly Mammoth, Jack, Fire/Ice Golem, Sandworm, and the Protector.
• Some other foes that will probably make a return include Furry Slimes and Kitten Forts, and I might also make a few completely new foes.
• A boss rush, including the 4 main bosses.
• A harder boss rush, including the 4 upgraded bosses.
• A super-long foe marathon, of all the non-boss foes in the game. (30-40 waves, probably!)
• An endless battle, similar to the super-long marathon, but with randomized waves of increasing difficulty, and with no end.
• I’ll also stick in some new block puzzles. (yay?)

All of those battles should hopefully increase the game’s length by around 25%.
Rewards for beating these battles will include a bunch of new achievements, item drops, and equips. The equips and skills from the premium pack will now be obtained this way, instead of getting them all at the start of the game.

The new area won’t give EXP, AP, or money, so that it doesn’t unbalance the game.

Battle Mountain will be accessible through the warp zone, right from the start of the game, but most parts of it will be blocked until you get items like the Axe, Ladder, etc, or defeat certain bosses. All of the foes will always be at the same level as you, so it doesn’t matter when you decide to go there.

On top of new stuff, I’ll also work on balancing existing content.
A lot of people mentioned that there wasn’t enough battles against small groups of strong enemies later in the game, so I’ll try to add more of those. (Either by recycling some bosses from earlier games, or making more “giant” enemies)

In case people haven’t noticed, I’ve already added a few interface changes to the Kongregate version, and there will probably be a few more to come. I’m also going to be redoing some of the graphics that I’m not happy with, for example, I’ve already redrawn the Furry Slimes from EBF3, and I’m thinking about giving the Jelly foes some cute faces. ^____^

There’s also a few features that only the Steam version will have:
• Fullscreen mode.
• No file compression.
• No ads or links of any kind.
• No internet connection needed! (People tell me that Steam needs a connection, but I can play Binding of Isaac without one, so it’s possible)
• Expanded concept art gallery, since filesize is no longer an issue. I’ll stick in the relevant art from EBF3 too, since a lot of people on Steam probably won’t have played EBF3.

Oh yeah, and HFX will be doing some new tunes for the new area, and maybe some more for the old content too!

Anyway, that’s what I’ve got planned so far. Thoughts? 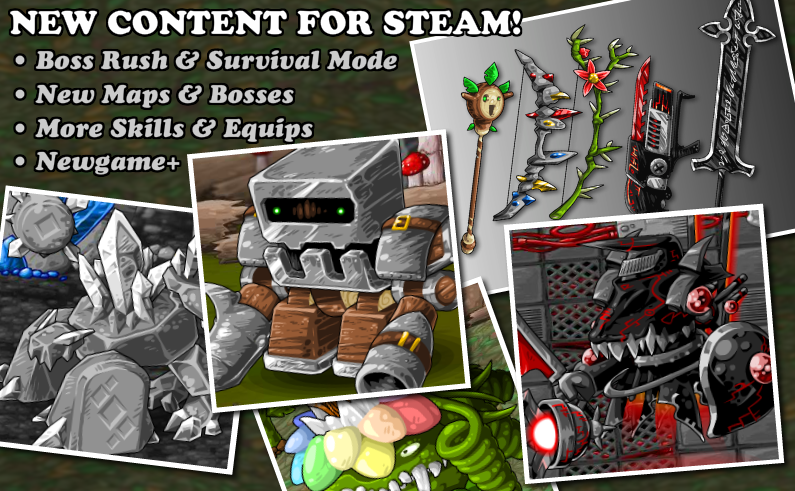 I’m finally a “real” game developer! Hurray!
Took a bit long (197 days), but things could have went a lot worse! 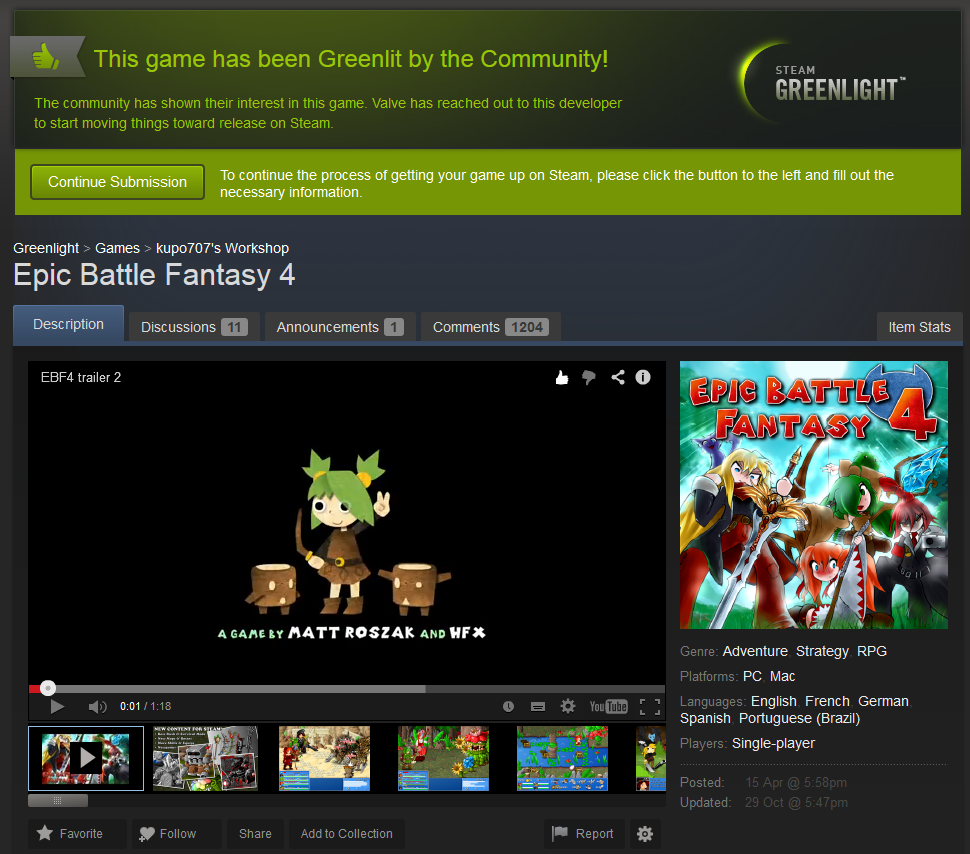 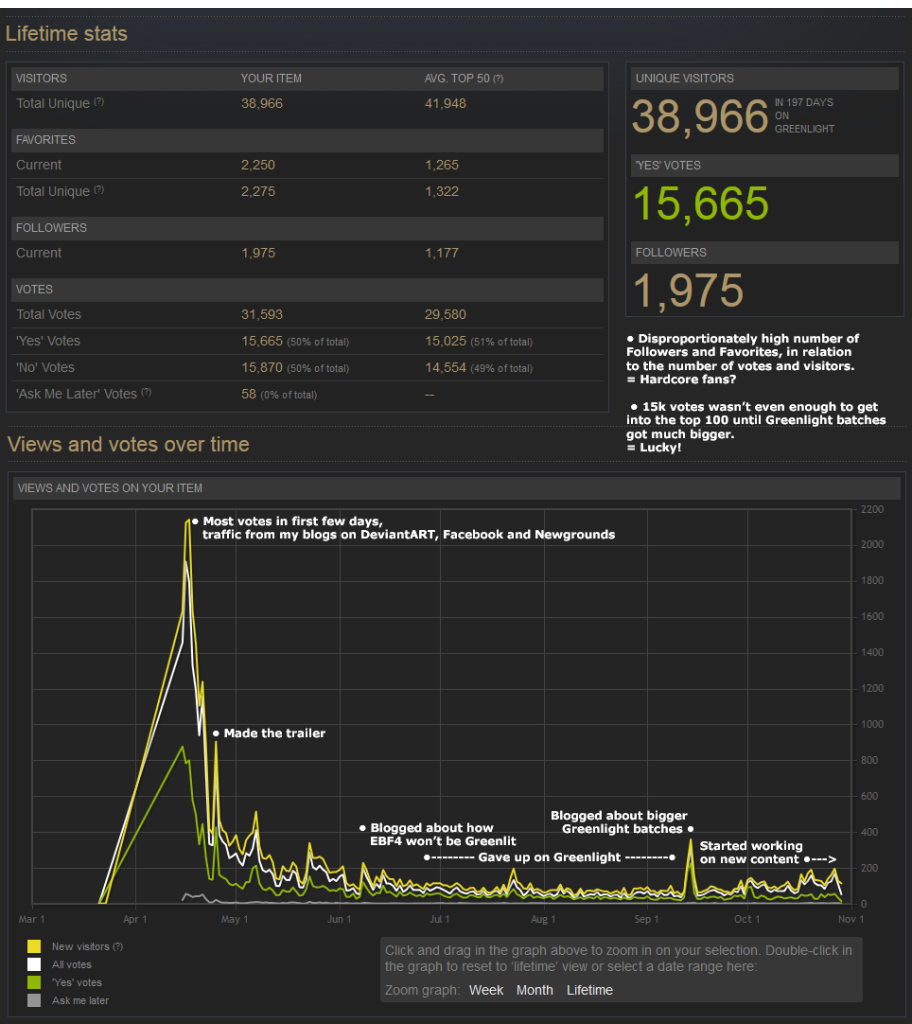 Here’s the final upgraded boss, the hard version of Rafflesia. It’s mostly a spellcaster now, and uses almost every element. It also has no elemental weakness or resistance, so you can pretty much ignore elemental properties for once.

Here’s the hard version of the Crystal Golem. He’s mostly going to use holy-elemental spells now, including Judgement and Genesis, and his helpers are going to have a variety of healing spells and suicidal attacks.