So as I mentioned a while ago, Mochi were hosting a Flash game developer meetup in London, and I was invited to speak at it. That happened last weekend, and here’s a blog about how it went. 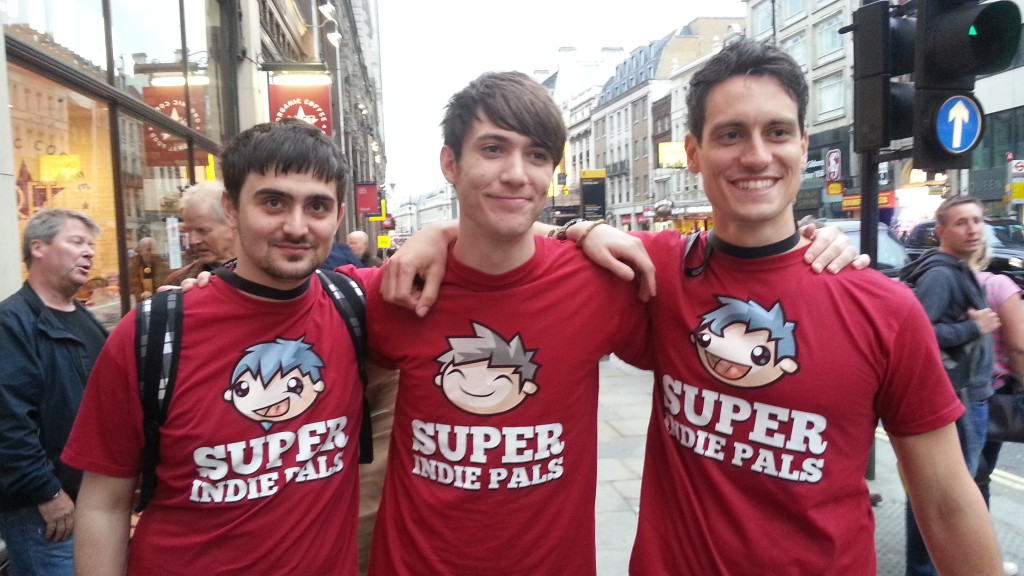 My favorite photo from the trip, with ChrisJeff, Jimp, and Jay Armstrong

This was actually my first time traveling completely alone, so it was quite educational. I planned the trip, explored, and stayed at a hostel by myself. I had never met any of the people at the meetup, and had only talked to a few of them online. I had never been to London before, and didn’t know much about it either.

But everything went better than expected.
Staying at a hostel is easy if you follow a few simple tips, everyone I met was friendly, public transport was easy to use, and getting lost is impossible when you have GPS on your phone. 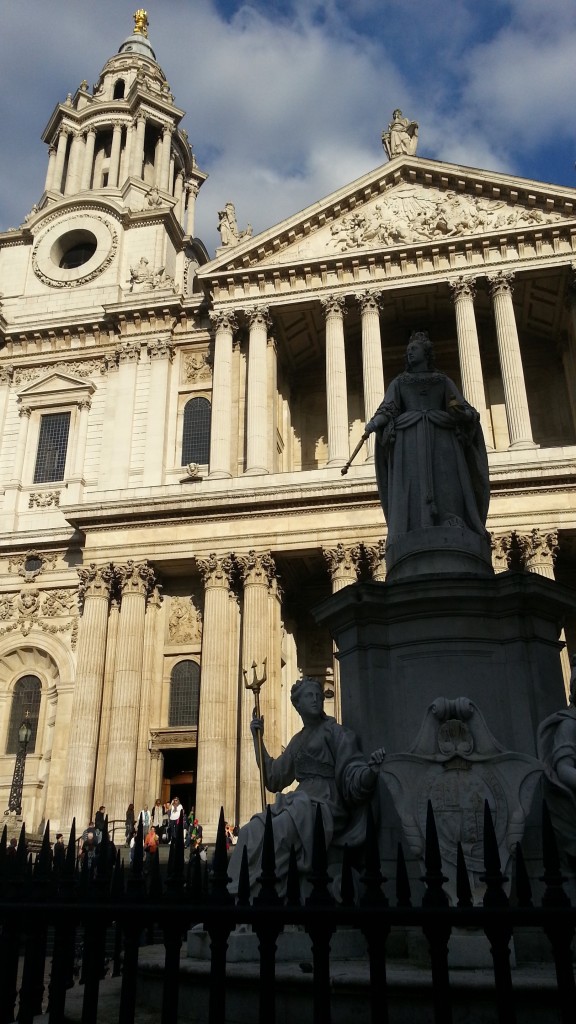 I spent my first day in London just walking around the city center.

Walked past the Shard, and that curved building that melts things. I hear that London has some of the highest skyscrapers in Europe, but they’re still pretty small compared to those in America or Asia. Having been to Hong Kong, I was not very impressed by the height of the buildings here. 😛

St. Paul’s Cathedral looked pretty nice from the outside, but it was kinda boring on the inside. Security guards were quick to stop people from taking photos, and the most interesting areas were reserved for people actually attending the services. Also, the style and layout of the inside looked pretty similar to St. Peter’s Basilica in Vatican City, but smaller and less decorated. So I wasn’t particularly impressed.

I also saw the Tower Bridge from a distance. Didn’t seem like a big deal.

So yeah! London’s buildings weren’t very impressive to me. The parks were nice though, and there seems to be quite a lot of them for such a big city.

I was supposed to meet up with ChrisJeff today, but he was very ill and stayed in his hotel, so that never happened.

The main Mochi event was a series of presentations at King’s College, with a bunch of food and networking breaks. There was a big variety of people there, including programmers, artists, game distributors, and students. Some were younger than me, but most were way older and more experienced than me. Around 40 people showed up in total.

This was the first time I met other developers that work in similar areas to me, so it was great being able to talk to people who actually understand what kind of work I do, and to also meet a lot of people who’s work inspired me as a kid.

My presentation was about the marketing and deployment strategy for Epic Battle Fantasy 4, and which parts worked and which parts didn’t. I might upload my slideshow later, but it won’t be very good without me talking, and I don’t think any of the presentations were recorded.

Anyway, I was a bit nervous about the whole thing, but it turned out fine. People actually found what I said to be quite useful, and noted that I sounded very “honest”.

And then we all went to the pub afterwards. 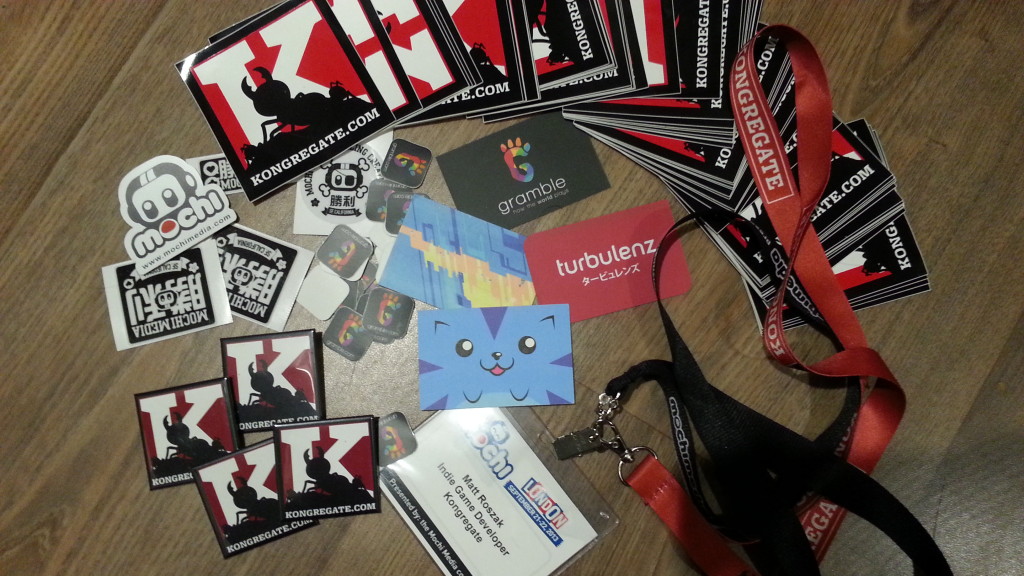 I got a lot of free stickers and business cards

Besides the 3 guys pictured above, some awesome people I met include Tom from the Super Flash Brothers, TheEXP, RobotJam, Colin from Mochi, the guys from Bad Viking, Toge Productions, and DampGnat.

Even though the event was sponsored by Kongregate, none of their official employees were there, which was a bit disappointing. It would have been cool to meet some of them, and some more American developers, but I guess it’s quite far to travel from San Francisco.

The second Mochi event was a short Game Jam at the Loading Bar, which is an awesome video game themed bar, with arcade machines and consoles. I didn’t participate in the Game Jam directly, as I don’t even own a laptop, but I did help out a bit by Googling for sound effects, and borrowing machines when people went on breaks.

Most of the time I was just playing games though. I got the top score in Defender! I wonder if the score will still be there when I come back next year. Me and Colin even played all the way through DoDonPachi together. 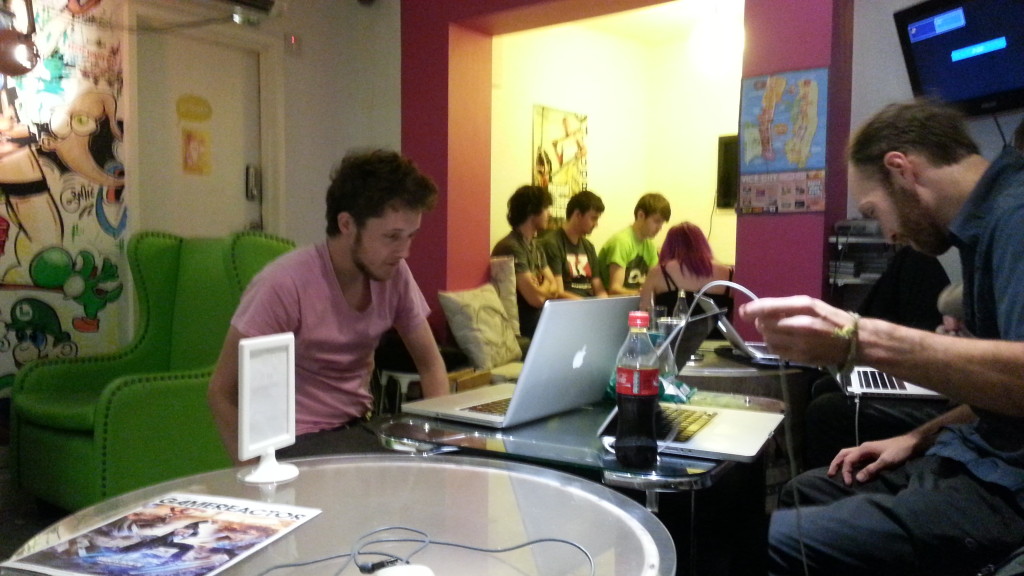 The Game Jam only lasted around 10 hours, so the games people managed to put together in that time weren’t terribly impressive. But there was one that was pretty fun; it was a local-multiplayer Unity game, with Xbox controller support, about gentlemen fighting on the Tower Bridge, and dodging raindrops.

I don’t think the games are available to play anywhere yet, but I’ll let you guys know if/when they are.

The Natural History Museum was really the only thing I wanted to see in London, because I had seen it in a lot of documentaries and it just genuinely looked like an awesome place to visit. And it was. The building itself looked beautiful, and the exhibits were also very interesting. There were tons of dinosaur skeletons, fossils, preserved animals, paintings, old trees, and minerals. If I had more free time, I would have liked to sit around and sketch some of the unusual objects they had. Instead I just took a lot of photos. 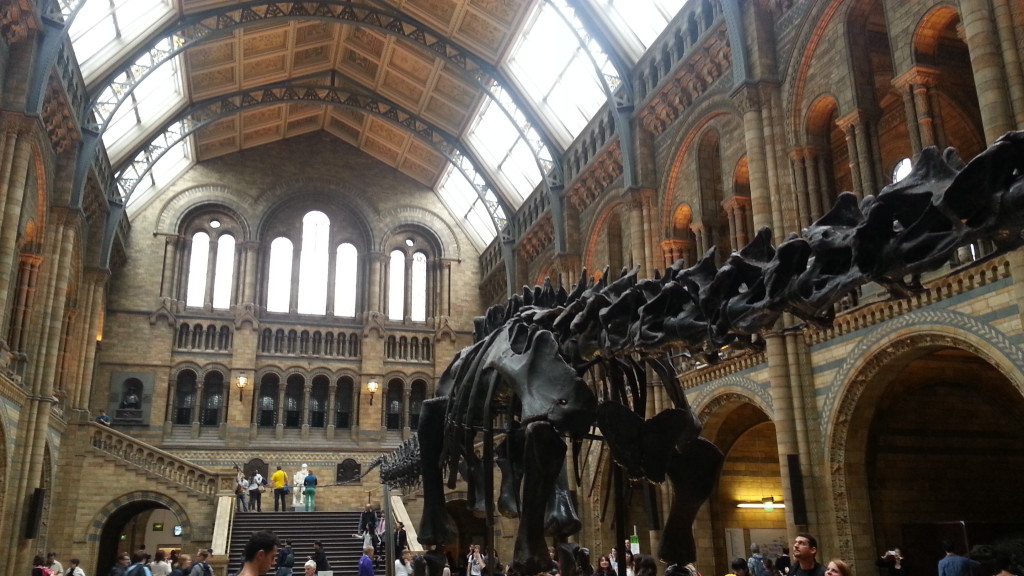 The main hall of the Natural History Museum looks amazing

I also visited the Science Museum, which was just next to the Natural History Museum, but I found it less interesting, mainly because I’ve seen similar stuff in other museums. They had a lot of vehicles, including cars, tractors, planes, and spacecraft. They also had a bunch of really old everyday objects, including some early computer hardware.

After that I headed home. The end.

Here’s a public Facebook album of all the photos I took in London (excluding those from the Mochi events).

4 thoughts on “Blog of London”