I’ve been adding a lot of new features to the site, and would like some feedback. Is everything working okay? Is there any features I’m still missing?

A few people asked for this, so here it is. You can subscribe to get emails every time something new is posted. I’ve been playing around with this, and it seems a bit spammy. Right now it’s set to send emails for every single post, which may be a bit much. Should I change it to email you once a week about all of the posts in that week? I’m also not sure what options users can access. I think you need a WordPress account to change the settings about what posts are emailed to you.

Added a Twitter feed at the side, because sometimes I feel the need to post really short comments. I haven’t been using Twitter much, but now I’ve got an excuse to start again.

I don’t want people to have to sign up to post comments, but at the same time I don’t want to approve the comments personally. At first this meant I was getting a lot of spam. I installed a spam filter plugin and it seems to be working correctly. Tell me if you think that any legit comments are being deleted.

I added ads! They’re quite out-of-the-way because I don’t want them to be too annoying. It’s interesting to see what kind of ads actually show up, because it tells me what Google thinks my website is about. So far I’ve been seeing ads about games and mobile phones, which sounds about right. Also anime chicks with big tits.

Kongregate lets you embed their games if they sponsor them, so EBF4, EBF3, AS and BH are being hosted by Kongregate when you play them on this site. But my older games are being hosted by me. I’m curious to find out what GoDaddy’s definition of “Unlimited Bandwidth” is. But the traffic I’m getting right now doesn’t seem like anything to worry about.

Just to show everyone that I am actually working on a game, here’s a screenshot of a very simple prototype that I made.
I’m not gonna say very much about it, but it’s obviously a game about cats in a cafe. 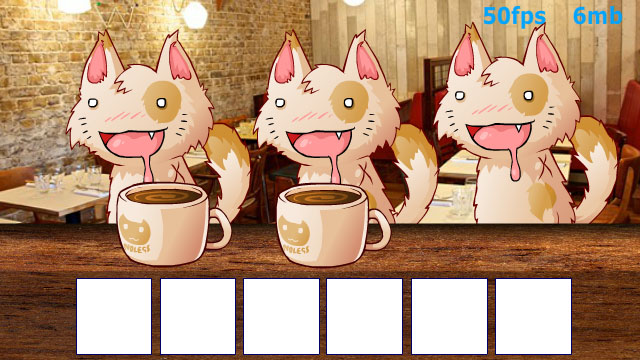 Some cute fanart from d4rk-pwaro! 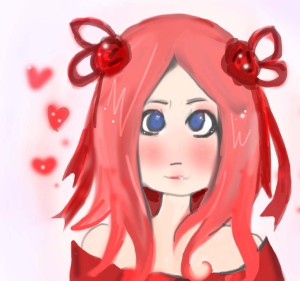 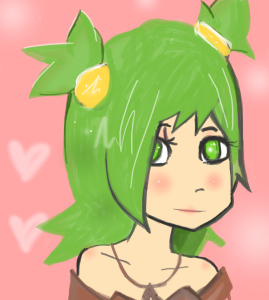 Hey, so as I mentioned before, I’m planning to start developing mobile games soon. I recently got a Galaxy Note 2 phone, or er, it’s almost big enough to be tablet actually. Anyway, I played a lot of games on it while I was in Sweden.

I’m trying to figure out what sort of games are popular, how controls are implemented on touchscreens, and how developers monetize and market their games. This post is mostly just some notes for myself, which others may find interesting or want to add to.

First of all, here’s a list of games that I played:

They’re all pretty fun and you should check them out. There’s still a lot more that I’ve installed and have yet to play…

I found that the more simple the controls, the better they worked. A lot of the games literally had one type of input:

Games that try to use traditional gamepad controls with onscreen buttons weren’t very fun to play in my opinion. They feel a bit awkward to play without physical buttons to guide your fingers: there’s a lack of physical feedback. Meanwhile, the above listed controls can be combined easily, as tapping, swiping and tilting are very distinct actions.

Lesson: Use simple controls that are native to phones and tablets.

A lot of the same schemes are used in mobile games as in web games, so there’s nothing too surprising here. Most games have achievements, level rankings, upgrades, highscores and the usual stuff.

Something which I found interesting was that a lot of the unlockables don’t even add to the gameplay. There’s stuff like new skins for your character, or wallpapers for your phone, or links to promotional YouTube videos. I guess this is because it’s a more casual market and kids like that sort of stuff? Maybe. I don’t know. Sounds fun to implement though.

I also noticed that a lot of games are updated with new level packs or other content to keep users coming back. Most web games on the other hand don’t usually add new content once they’re finished, unless they’re really popular. This is down to the distribution method I guess: mobile games can easily alert you to new updates, while web games are hosted on a lot of different websites and can’t be updated so conveniently.

Lesson: Add plenty of stuff to unlock, whether it effects gameplay or not. You can also update games.

This is the most important section, for developers anyway. I’ve noticed a lot of different approaches to monetizing mobile games…

The best monetization method really depends on the type of game and amount of content you’ve got.

Lesson: There’s a lot of different ways of making money!

Anyway, that’s all for now. I still need to do a lot of research (income and download stats for different games, if I can find those!), but that’s a good start.

Hey guys, I just got back from an 11 day trip to Sweden.
It wasn’t a particularly interesting trip; I didn’t do much sightseeing or anything fancy. Just chilling out with student type people and experiencing some very different living conditions.

My brother’s been studying in Luleå for the past year, and he’ll be going home soon, so this was my last chance to visit. Most of the students were gone by the time I got there, but there was still a bunch of awesome people left. My brother’s got a flat all to himself now, and lots of leftover gear (bikes, food etc) from the other students.

I already visited in January, so the journey there was pretty routine; Ryanair to Stockholm, and then got a sleeper train to Luleå. Went with a slightly more expensive cabin this time, and although it was a bit more comfortable, I still couldn’t sleep much. Long train journeys aren’t for me. The whole journey took 22 hours, 13 being on the train. My new phone kept me entertained though (more on that in my next post). 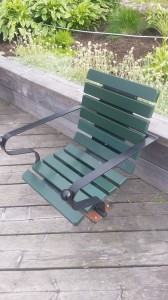 The most Swedish thing there is: Benches for one person.

I’ve heard that Swedish people avoid confrontations whenever possible, and I saw this demonstrated on the train. I was sharing a cabin with two other guys, and it seemed that the staff had forgot to unlock it for us when we boarded. So we stood there awkwardly waiting for someone to come along and unlock our cabin. After 20 minutes of waiting I was like “Shouldn’t we find someone to complain to?!”, and they were like “Nahhhhh, the ticket guy will come round eventually.” This attitude did not please me.

When I arrived in Luleå, the first thing that struck me was the constant daylight. It never got dark enough to turn on street lights. This was super ultra awesome. Darkness is depressing.

My brother quickly introduced me to dumpster diving, which we later indulged in almost every night. Seems it’s a really popular activity for students there, and most of the ones I met did it. They’ve even got their own Facebook page for posting any treasure they find. I guess this explains how my brother was surviving without spending any money.

Most of the food that gets thrown out is still perfectly good, even if it’s expired, but a lot of it isn’t even. For example, if one egg in a set breaks, they throw out a whole box of good eggs! Our best find was 7kg of expensive salmon, worth almost $300. Luleå’s a great city for dumpster diving. It’s light all night, there’s no police, and Swedes won’t confront you about it. 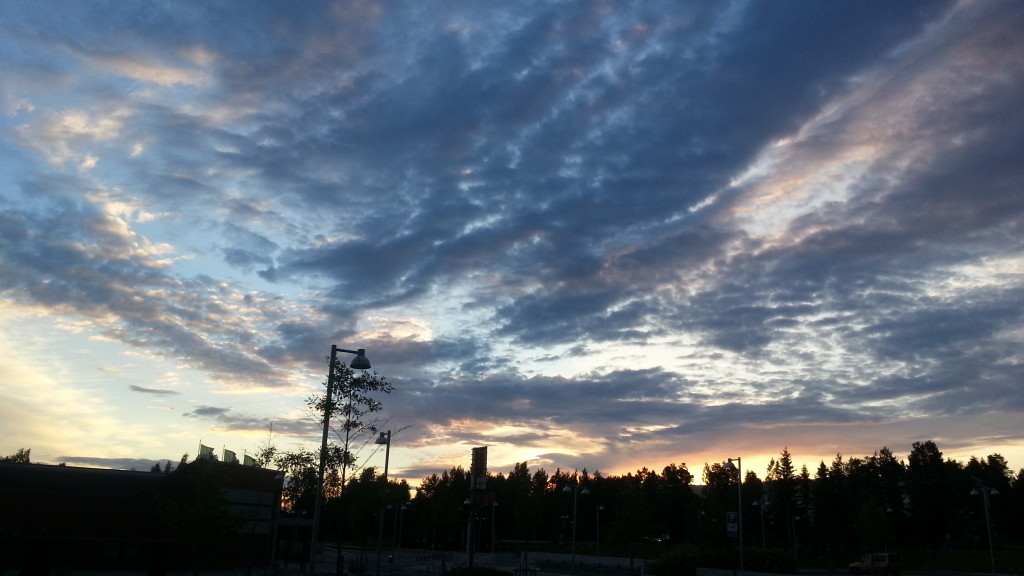 Anyway, enough about that. Our only method of transport around the city was by bicycle. My brother has collected a lot of bikes that have been abandoned by other students. It was interesting trying to pick which one looked the least crap. Cycling’s pretty awesome when there’s not a lot of road traffic around, and when your bike’s not gonna be stolen instantly if you leave it the city center (Luleå’s only 50k people). 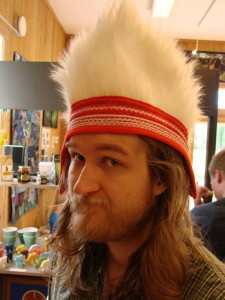 Me and my bro cycled to some nearby farm town. Dunno what it was called, but they had cows and pigs and herbs and farmy things. It was really touristy, with lots of souvenir shops showing off animal chunks and artwork by the Sami people. Everything was mighty expensive though, and I’m not sure if the airport would even let you through with most of it. There were knives made of antlers, wolf pelts, bear gloves, drinking horns, weird sculptures, and stuff like that. Most of it looked awesome in context, but would be totally out of place anywhere else.

That was the only touristy place I visited. Most of my days afterwards were spent hanging out with my brother’s buddies. 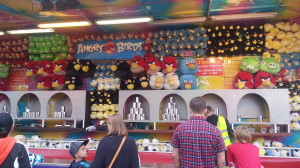 How popular is this game?!

There was a festival going on in town for a few days. They had theme park rides and music and boats and that sort of stuff. One of our Swedish friends got back from some sort of boat trip, and we got to hang out on his boat for a while. It was quite a large sail boat which could support 9 people.

Hung out with a group of stoners one day. They had some unusual hobbies; carving knives, shooting stuff with air rifles from their balcony, and most recently slacklining. We joined in on the slacklining, but didn’t get very far. It’s really hard to even stand on the thing, let alone walk along it. Apparently they had been practicing for 3 days straight because they didn’t have anything better to do. They left on a long hiking trip the next day and I didn’t see them again. 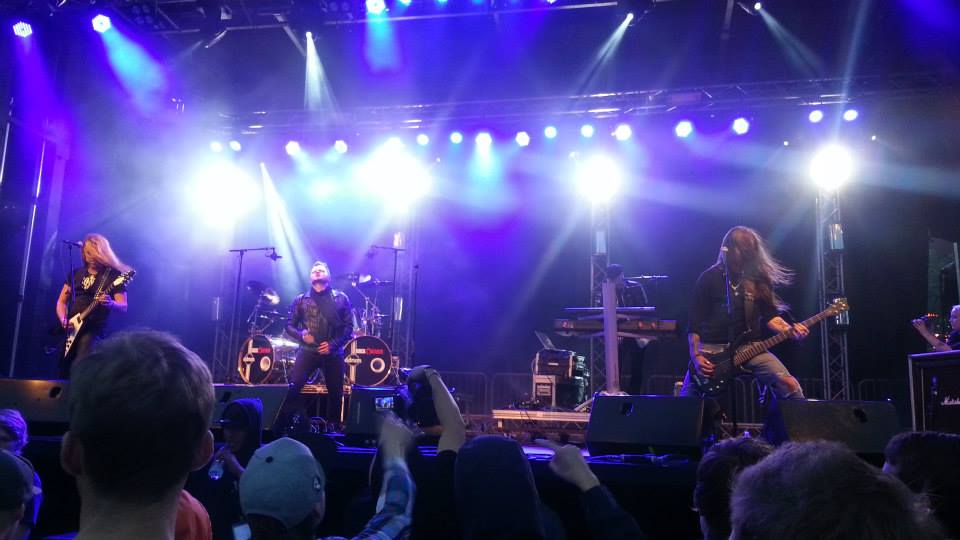 Dunno who these guys were, but they were pretty awesome.

The next time we visited the festival there was a heavy metal band playing! Previously they only had pop bands for 5 year old girls, so this was a nice surprise. The crowd wasn’t too enthusiastic though.

Errr, that’s about everything worth noting I think. The rest of the trip is Facebook material; a birthday party, a barbecue, and stuff like that.

Oh, and I tried eating horse and reindeer sandwiches, just because. They were delish.

My journey home was also quite uneventful, except this time I took a flight down to Stockholm instead of the train. It was totally worth it, and it’s not even more expensive if you book early enough. Flew with Scandinavian Airlines that time, which was amazing compared to Ryanair. I almost forgot that flying can actually be somewhat comfortable. What’s that? I don’t actually have to print off my boarding pass for no reason? I can just keep a copy on my phone? You’re even giving me free coffee? Woah! 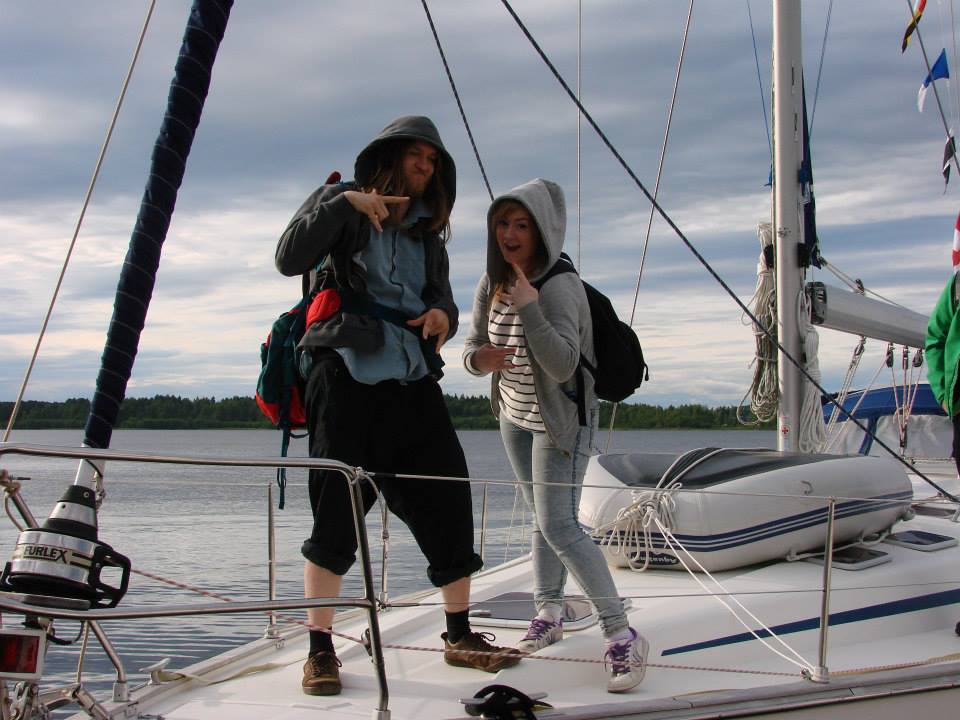 On a motherfucking boat with a super awesome Swedish girl.